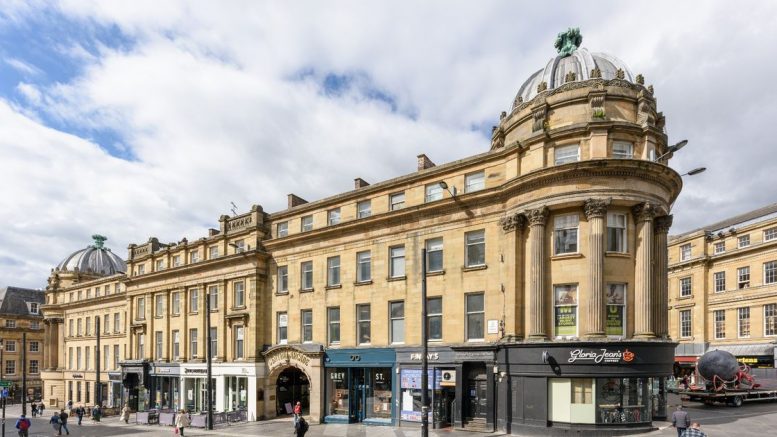 Real estate billionaires the Reuben Brothers have swooped for a historic Newcastle city centre shopping arcade in a multimillion-pound deal.

The entrepreneurs beat competing bids from local and national companies to acquire Central Exchange, a Grade II-listed triangular retail and arcade property with 22 shops that has dominated the city centre since the 1830s. The deal comes less than two years after Reuben Brothers bought luxury retail building Monument Mall in 2021, using their property investment vehicle Motcomb Estates to buy the property.

The same investment company swooped for the neighbouring Central Exchange, paying ‘significantly’ more than the £11.75m asking price. The building was marketed by Clifton Agency, the same property experts who sold Monument Mall to the Reuben Brothers in May 2021, who acted on behalf of vendors Royal London Asset Management (RLAM).

While marketing the property Clifton Agency said its represented the chance for investors to acquire a historic trophy asset in the heart of Newcastle, at a time when new developments are expected to increase footfall in the area. The landmark deal means Reuben Brothers now owns a large share of Newcastle city centre land and property, with Monument Mall and Central Exchange’s ownership sitting directly next to its £100m-plus developments taking shape in Pilgrim Street.

The real estate entrepreneurs own the entire Pilgrim Street site, stretching from the former Odeon Cinema plot down to Swan House roundabout. Construction teams are now on site with the three-phase scheme to regenerate the East Pilgrim Street area, which will eventually create a raft of retail, leisure and office schemes to completely reconfigure the entrance to the city.

More than 9,000 HMRC workers will eventually move into new offices called Pilgrim’s Quarter where the Odeon Cinema once sat, while a number of offices and an underground car park will dominate Bank House Square at the end of the street, on the former Bank of England plot. Between those office developments, work to restore and refurbish listed buildings at Worswick Chambers and the adjacent 93-101 Pilgrim Street will provide homes for new bars and restaurants, alongside the creation of a new hotel within the former fire station.

Its newest acquisition Central Exchange will net a sizeable chunk of rent, encompassing the building’s basement, ground and first floors, including the ornate Edwardian shopping arcade. The second, third and fourth floors have been previously sold off on long leaseholds.

The building was originally built in 1837 but had to be rebuilt in the early 20th century after a fire in 1906, and tenants today include JG Windows, Cafe Andaluz, Grey St Opticians, Naked Deli, Bluebird, Cote Brasserie and Greggs, which collectively bring in more than £1.06m in operating income each year.

The company’s marketing materials said: “The arrival of 9,000 staff into the new 463,000 sq ft regional centre will increase footfall past the subject property and enhance the vitality and viability of the nearby city centre retail core. The city’s thriving nightlife is estimated to be worth £340m per year and is a major contributor to Newcastle’s economy.

Following the deal, Ben Simpson of Clifton Agency said the sale was a result of strategic advice provided to its client over the last 15 months, which entailed detailed asset management and investment advice.

Mr Simpson commented added: “Having grown up in Newcastle it was a real pleasure to advise Royal London on the disposal of this historic and extremely well known local landmark. To achieve such a positive result in a challenging market was a real testament to everyone involved in the sale. After strong competitive interest, the preferred bidder paid significantly above the asking price to secure this landmark freehold property.”

Will the Platinum Jubilee bank holiday be paid time off?