Hotel apartments are an ideal alternative to high-priced, small-sized rooms offered by many London hotels. The serviced apartments give you the independence and flexibility of your own self-catering home, together with the comfort and service of a hotel. The exclusive properties are available for short-term rental on a self-catering basis, making them ideal for corporate housing. Weekly maid service is often included, or can be provided on request and if necessary, several colleagues can easily be accommodated together.

Enjoy holidays in style and comfort in London vacation rental apartments. The short stay, vacation apartments are perfect for families or a group of friends. Homes are fully furnished and equipped with kitchen and laundry facilities on site, which will make your life much easier during your holiday in London. Take your meals when you want to, entertain local friends, come and go as you please – enjoy London as do.

The Arosfa Hotel is a refurbished 200-year old Georgian Town House in the heart of historic Bloomsbury district, the former home of the famous Pre-Raphaelite artist Sir John Everett Millais. The cool white garden squares and wide streets of Bloomsbury have been a pull to thinkers for centuries, and it sometimes seems like every second house has a blue plaque denoting that a great writer, scientist or philosopher once inhabited the building. It was in Bloomsbury that Karl Marx created communism, Virginia Woolf defined the twentieth century British novel, and Charles Darwin first conceived the theory of natural selection. The imposing bulk of the British Museum, home to seven millennia of human art and artefacts, dominates the area, and there are plenty of other academic institutions including Birkbeck College, the beautiful University of London Library, and RADA, London's grandest drama school.

They started onefinestay to give people a new way to experience a place. Handmade hospitality provide for stays in the finest homes. And it begins with their members. They hold the key, not just to their own front doors, but to something much bigger. Most importantly, they know what it takes to make a home yours, forever, or just for a little while. It’s a labour of love, and they want to bring their handmade hospitality to the world’s greatest cities. 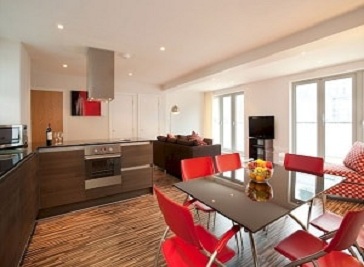 This award winning Aparthotel is the perfect base for exploring all that London has to offer. You'll receive a warm welcome from the SACO reception team, who'll help you settle in to one of our studio, one or two bedroom apartments. Each is individually designed with contemporary European furniture, stylish soft furnishings and fully-equipped kitchens, so when you're not out and about, you can kick back and relax in style.