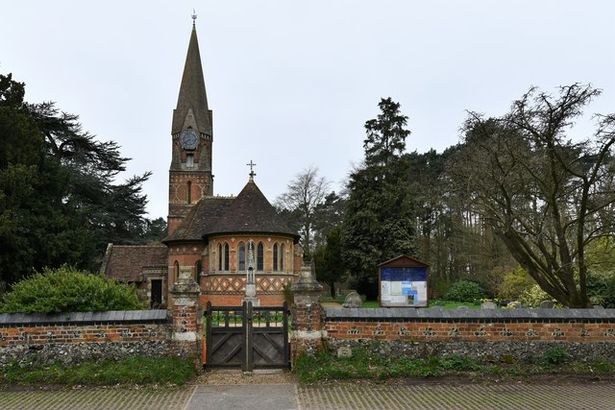 London might be the furthest you can possibly get from a deserted medieval village.

The hustle and bustle of the city is near-constant and there is activity 24 hours a day – even in the strange times we’re currently living in.

But for those in desperate need of some peace and quiet, you might be glad to know there are old and abandoned settlements dotted all over the country.

And there are even some just outside London.

It’s estimated there are around 3,000 ‘shrunken’ villages in England – and that’s just the ones we know about.

Maybe you’re the adventurous type that likes to see quirky new things, or maybe you just need to get out of the city for a weekend.

We’ve pulled together some forgotten villages from the home counties and beyond.

This village and civil parish in the Welwyn Hatfield district of central Hertfordshire had a tiny population of just 245 at the 2011 census.

There is no public transport to Ayot St Peter, and the nearest station is Welwyn Garden City – a 2.5-mile walk away.

Running through the village is a disused railway line known as the Ayot Greenway which is popular with walkers and cyclists.

This one might be a bit of a trek to get to, but it looks worth it for those who decide to venture out.

The village of Caldecote consists of nothing more than a few cottages around the redundant St Mary Magdalene’s Church.

The impressive Grade II* listed building, which is thought to originate from the 15th century, has been under the care of Friends of Friendless Churches since 1982.

A new group, Caldecote Church Friends, was established in 2007 to assist with the management of the Anglican building.

Digswell in central Hertfordshire has a population of just over 1,600 was first recorded in the 1086 Domesday Book.

But it still has a few signs of it’s earlier namesake.

The 13th-century church of St John the Evangelist, and the 19th-century Digswell House building are still standing, although they have been altered by time.

On the outskirts of north Berkshire, Purley on Thames is a village and civil parish.

Near to Reading, it was historically made up of three separate manors and settlements, and many of its houses were turned into farmland in around 1800.

As a result of its proximity to the tames, it has been subject to severe flooding, but it still exists today and might be one for you if you’re a fan of waterside views.

Henwick, near to the market town of Thatchem, is another forgotten settlement in the county of Berkshire.

The rural hideout is a place of beauty, boasting stunning views and beautiful homes and cottages.

The village also shares its name with a 37-acre sports ground in the west of Thatchem that hosts a number of the towns sports teams.

Bockhampton was once situated on the River Lambourn in Berkshire.

It was first mentioned in the Domesday Book of 1086, but the village was uprooted in 1776 to make way for lucrative sheep farming.

Since the 18th century, the area has been sparse, but Bockhampton Manor house has survived and there is even a road sign leading you down a path where the village once stood.

Ackhampstead was an ancient township near to the vast Chiltern Hills in Buckinghamshire.

While there are no visible remains at this site, local historians have worked hard to try to piece together the history of the forgotten settlement.

They say there was once a chapel that was demolished and replaced with a “more convenient church” in neighbouring Lane End.

The nearest modern village to the ruins is Frieth, which contains many other ancient properties.

Addingrove is another former hamlet, this time in the west of Buckinghamshire.

It was recorded in the Domesday Book of 1086 and is now mostly deserted.

The only things that remain are Addingrove Farm and a cottage and it’s nearest market town is Thame in neighbouring Oxfordshire.

It’s thought that the only remaining building on the original site is a derelict barn.

Fleet Marston is situated around 2.5 miles away from the centre of country town Aylesbury.

The deserted medieval village still exists although it has a minuscule estimated population of just 47.

It’s home to the redundant 13th century St Mary’s Church although parts of it could even stem as far back as the 12th century.

Local historians say that St Mary’s Church is where John Wesley, the founder of the Methodist movement in the Church of England, gave his first sermon.

Dode, or Dowde, in Old English, was all but wiped out by the Black Death in 1349, but some of its medieval roots are still visible today.

Near to Gravesend in Kent, all that remains in the village is a church that was rebuilt in the 1990s.

It’s now been licensed as a wedding venue and came to national prominence in 2009 when a bride-to-be pleaded for help getting to and from the church due to snowstorms.

Dode could also be one for horror fans – according to local legend a seven-year-old girl was the final survivor of the Black Death and is said to haunt the churchyard.

Also known as Our Lady of Elwarton, Faversham Stone Chapel was a medieval settlement thought to be the only known English chapel to incorporate the remains of a pagan shrine.

The Anglo-Saxon ruins are now classified as an ancient monument and managed by The Faversham Society.

If you’re interested in having a look, the ruins can be found among farmland and grass just north of the A2 opposite Faversham Road.

This hamlet is a little different too many of our others, as it is now entirely underwater.

Hampton-on-Sea began as a tiny fishing hamlet in the late 19th century, until the whole area drowned due to coastal erosion in 1921.

Its remains can now be found in the Hampton area of seaside town Herne Bay.

Clopton is a deserted medieval village South West of Croydon, Cambridgeshire, and is now a place of stunning views and vast green space.

Its remains are classed as a Scheduled Ancient Monument meaning they are protected from any change.

Originally, Clopton had a parish church and a mill, but it’s thought the church was demolished in 1660 to make way for agriculture.

Washingley is a small hamlet in the north-west of Cambridgeshire

This shrunken medieval village is in the civil parish of Folksworth and Washingley which has a combined population of just under 900.

Many of its original fields have been ploughed and planted with crops.

But local historians say it’s still possible to see the old ground contours – though you may need to use a little bit of imagination.

Deep in the Cambridgeshire Fenlands, Stonea Camp is an iron age hill fort.

It’s the lowest of its kind in Britain, but the hill still provided significant amounts of habitable land amid the flooded marshes of the fens.

The fort was excavated in 1980 by the British Museum, and this was followed by restoration work in 1991.

Its outer banks and ditches have now been recovered, and the area is designated as a pocket park and scheduled ancient monument.

Cuddington doesn’t officially exist anymore, but where it would have been is definitely worth your time.

The village was demolished to make way for Henry VIII’s Nonsuch Palace after being purchased by the king in 1538.

The site is now contained on Nonsuch Park, a gorgeous public park on the between the border of London and Surrey.

If you’re a history buff who likes to get out and explore, this one could be for you.

This former village also appeared in the Domesday book of 1086 and is now a barely populated area in the Reigate district of Surrey.

Gatton Park is a landscaped grounds with a public footpath that can be used by walkers.

Every so often, more of the park is open to ramblers to explore.

And finally, here’s one that might surprise you – as you’ve probably been to it.

Millions of us have flown through Heathrow airport at some point in our lives.

But what you might not know is that the site of Heathrow was also once a medieval settlement of the same name.

Before all its buildings were demolished to make way for the airport in 1944, it was a wayside hamlet and row of smallholdings across from Hounslow Heath.

The name Heathrow described its layout.

While the hamlet and its people are now no more, its legacy lives on through the international transport hub.