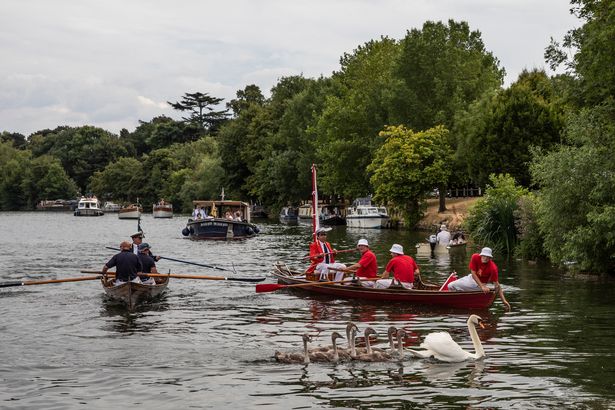 Most of us don’t give too much thought to how the places around us get their names.

But the words we use for places can tell stories about their history and significance to people hundreds or even thousands of years ago.

The Thames is the UK’s longest river, flowing all the way from the Cotswolds, passing through picturesque villages, through the vast metropolis of London before reaching its final destination of the North Sea.

It’s now the home of major landmarks like the Tower of London, the London Eye, the National Theatre and the BFI – so it’s hard to imagine what the skyline looked like long before these existed.

The origin of the River Thames ‘ name is not fully certain – and even experts in etymology (the study of the origin of words) don’t necessarily agree.

The names of Britain’s rivers are some of the oldest in our language and there’s evidence of the river having different names through time in major historical documents like the Magna Carta.

Some believe it came from the Middle English Temese, derived from the Celtic Tamesas, while others believe it has evolved thanks to settlers such as the Romans.

According to Visit Thames: “The River Thames may take its name from the Sanskrit Tamas meaning ‘dark’ as its waters are often dark and cloudy; another school of thought is that it is named after the Roman Tam meaning ‘wide’ and Isis meaning water.”

Us Londoners often refer to it simply as “the river” when we talk about people being “north or south of the river”, which definitely makes things simpler as it’s a major reference point for us.

Living in the city means we often forget that the river is actually 215 miles long and has been an important trade route over the course of its history.

The Romans may have even been influenced by the Thames when they were choosing where to build London.

After invading Britain in AD43 the Romans made their way along the river, finally coming to a perfect point for a port and naming the area Londinium.

It’s since formed the backdrop to countless historical events, like the Great Fire of London in 1666 and the founding of the Tower of London.

So think about that next time you’re by the river, as us Londoners definitely take for granted the history that’s all around us. Police seize BMW driven by unqualified driver who had no insurance

Investigation is ‘not in the public interest’ and the case has been discontinued, says prosecution service My London – Local News …