The history of the London West End has been inextricably linked to the theatre for hundreds of years. From the opening of the first West End venue in Drury Lane in 1663, locals and visitors to the burgeoning capital flocked in their droves to the West End to be entertained and enthralled by the various shows on offer. The London theatre tradition has continued to go from strength to strength over the years, and today the West End is the largest theatre district in the world, with many major international stars treading the boards night after night.

No other city can boast the same variety and quality of theatrical performances as London’s West End, and its enduring popularity as a global cultural centre stands as a ringing endorsement of all it has to offer. London’s West End theatres have been dazzling audiences for years. Whether you fancy a big-name musical or something a bit more 'off-Broadway', there have many of favorite offers so you can experience London theatre at its best. Find for your new favorite West End musical; from heart-warming adaptations and award-winning scores, to hilarious musical theatre.

This impressive building in the heart of Covent Garden has been playing host to major stars of the classical music world since 1858. The third theatre to be located on this site, today's Royal Opera House is the result of a reconstruction in the 1990s (although the main auditorium is part of the original building). It is a beacon of modern theatre design and the place to go for high quality performances in sumptuous surroundings. As one of London's most esteemed, iconic and beautiful performance venues, it's worth a visit even if you're not a ballet or opera fan. Before 1999 the theatre only opened its doors to ticket holders just before performances but today you can explore parts of the building for free during the day - the Paul Hamlyn Hall with its dramatic glass atrium is especially worth a peek. For smaller scale productions such as chamber opera and experimental dance shows there's the 400-seat Linbury Studio Theatre and the Clore Studio Upstairs holds an audience of 180 for more intimate events and performances. 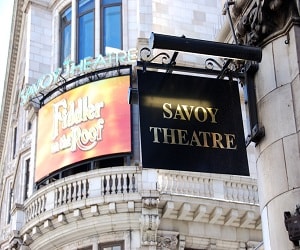 The magnificent Savoy Theatre has been hosting notable theatre productions and stage shows since its opening back in 1881, when theatrical impresario Richard D’Oyly Carte commissioned the building of a new theatre to host the original comic operas of famous pair Gilbert and Sullivan. Ever since its debut performances the Savoy has been synonymous with premiering quality drama, opera and musicals, and has enjoyed a varied history in the process. The Grade II-listed theatre was the first public building in the world to be lit entirely by electricity, and it has blazed a trail for London in the following decades both in terms of innovation and modernisation. The original building was designed by C. J. Phipps and was an architectural milestone in its use of electric lamps above gaslights, and in its opening years the Savoy was focused largely on the operatic production of Gilbert and Sullivan, giving rise to the term ‘Savoy Opera’. However, in 1929, the building was closed for renovation and the design was completely replaced by a ceiling painted like the sky and seating intended to reflect flower beds in its colouring.

The Aldwych Theater is a West End theater, located in Aldwych in the City of Westminster. It was listed Grade II on 20 July 1971. Its seating capacity is 1,200 on three levels, a fairly large auditorium. The theater was constructed in the newly-built Aldwych as a pair with the Waldorf Theater, now known as the Novello Theater. Both buildings were designed in the Edwardian Baroque style by W. G. R. Sprague. The Aldwych Theater was funded by Seymour Hicks in association with the American impresario Charles Frohman, and built by Walter Wallis of Balham.