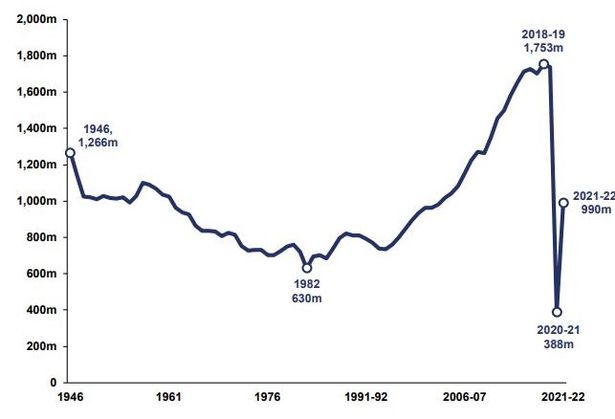 Rail passenger numbers are continuing to rise, but remain well below pre-pandemic levels.

According to the latest figures from the Office of Rail and Road, rail passenger journeys are now at 56.9% of the 1.739 billion journeys made pre-pandemic.

This was more than double the 388 million recorded in the previous year.

The total UK passenger revenue was £5.9bn between April 2021 and March 2022, nearly three times the £2bn generated the previous year and equating to 54% of the £11bn generated before the pandemic.

This made up 62.1% of the 443 million journeys made in Q1 2019, which was the last equivalent quarter before the pandemic.

As well as an in-depth early morning newsletter, we will be sending out regular breaking news email alerts. To sign up to this service CLICK HERE

And, follow us on LinkedIn to catch the latest stories and to network with the Welsh business community.

Although passenger rail journeys are slowly returning to pre-pandemic levels, the number of journeys made in Q1 2022 was 10m less than the previous quarter, when 285m rail passenger journeys were made in Q4 of 2021.

This may be due to the spread of the Omicron variant which saw England reintroduce work from home guidance from 13 December 2021 until 19 January 2022.

Guidance on home working was relaxed in Scotland from 31 January while in Wales it was 28 January.

The Department for Transport estimates that rail journeys between 10 January and 5 February 2022 were 55-60% of what they were pre-pandemic. However, this peaked at 80% for the week ending 18 March 2022.

In the long distance sector, it recorded 87m passenger journeys between April 2021 to March 2022, which made up 62.8% of the 139 million journeys recorded two years ago.

London North Eastern Railway recorded the highest percentage of journeys in the last year at 83.3%.

The regional sector recorded 231 million journeys giving a relative usage of 58.3% to pre-pandemic levels. Relative usage in this sector ranged from 70.4% for Caledonian Sleeper to 48.4% for ScotRail.

London Overground recorded the highest relative usage in the London and South East sector at 68.2%.

Transport for Wales, which operates trains in the Wales and Borders network, recorded 55.4% usage compared to pre-pandemic (April 2019 to March 2020).

The report recorded 39.1bn passenger kilometres recorded in Great Britain between 1 April 2021 and 31 March 2022, making up 58.6% of the 66.8bn kilometres travelled pre-pandemic.

However, passenger kilometres per journey were 39.5 this year, an increase from 38.4 before the pandemic.

Chiltern Railways recorded the lowest relative usage of the franchised operators at 47.5% of the passenger kilometres travelled pre-pandemic.

Ten franchised operators recorded a longer average journey length this year compared to pre-pandemic levels including Transport for Wales which recorded the largest increase at 13.3%.

Great Western Railway (up 12.2%) and Northern Trains (up 10.6%) also recorded increases in average journey length of more than 10%.

By contrast, the average length of a journey on c2c this year was 12.7% shorter than that recorded two years ago.